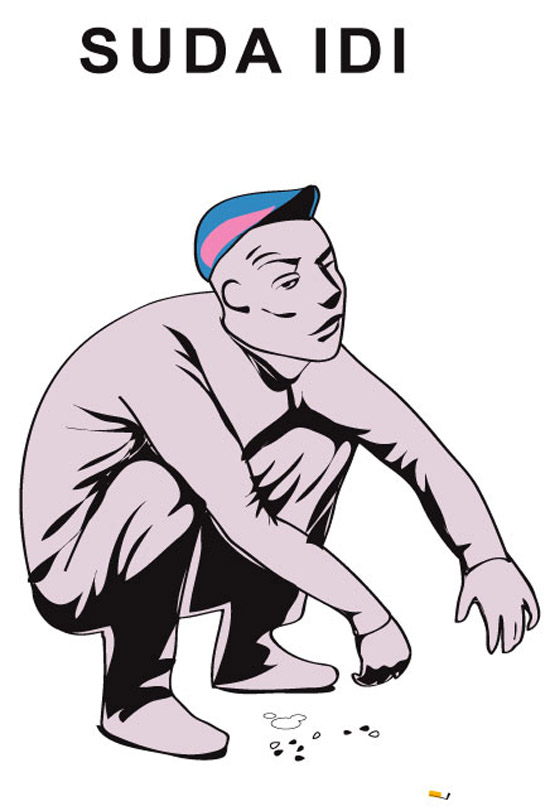 It’s a Russian phrase with which you can have difficulties to explain it to native English speaker. First of all, you should explain the meaning of the words ‘пизди’ and ‘пиздим’ based on the word ‘пизда’.
So, ‘пизда’ is a Russian rude slang word to name vagina, a women sexual organ. This word has stress on the first syllable like ‘пИзда’. Usually, it used when a person angry or wants to emphasize the emotional context of something.

But to explain it better we also need to explain the word ‘пизда’ not in sexual organ meaning but in meaning that describes a state of the situation. We can hear as someone will say ‘ему пизда’. It’s can describe a very bad state or situation for some person. Maybe he going to die or be seriously injured or beaten or punished – ‘ему пизда’.
To describe your opinion about something you can say just ‘пизда’, for example, you just broke your computer accidentally or broke your leg or you just fired from a job and you have a lot of debts – it’s ‘пизда’.
Another word for bad situations is ‘пиздец’, stress on the second syllable, like ‘пиздЕц’. The difference in more emotional expression and in general both words can be used as synonyms. But if the situation just happened or it’s a very bad situation, but you can live with that and now you just very sad about that, the Russian can say ‘пизда’. If something bad happened and it’s already finished and can’t be undone it feels more like ‘пиздец’.

There are several rude words which inherit from ‘пизда’ but they have different meaning based on context. It can be the verb and it can be the adjective or a noun.

One of them is the verb ‘пиздеть’  and it’s forms like ‘ты пиздишь’, ‘я пизжу’, ‘они пиздят’, ‘не пизди’. We are interested in the last one. We can’t translate it literally to English. To pronounce it right we need to put stress on the second syllable, like ‘пиздЕть’.
The meaning of ‘пиздеть’ is to speak and it’s like a rude comparison of mouth with woman vagina. It means like you say bullshit, you say something really bad or what you are saying is not true. If a person knows you are a liar or know that what you talking about not real and can’t be true, or if the person doesn’t like what are you saying, he can tell you – ‘не пизди’. By meaning the closest translation is ‘shut up’.

The other form with a different meaning is the verb  ‘пиздить’. As you can see there was changed only one letter and stress put on another syllable in the word, like ‘пИздить’.
Literally, meaning can be translated like ‘kick-ass’ or ‘beat him very hard’. So, when one person very angry on another (maybe because he didn’t stop ‘пиздЕть’) he can commit physical violence on this person. When he hits another person it’s can be called ‘пиздюля’, it’s a noun that describes very hard and good hit or punishment. In the process of ‘пиздить’, there can be a lot of ‘пиздюля’ caused on a person by another person(s).
And at the end of ‘пиздить’ the beaten person now in state ‘отпизжен’, it’s an adjective to describe hard beaten person. And person one, who commit beating, now in state ‘отпиздил’ towards to his victim. We can say ‘Иван отпиздил Федю и теперь Федя отпизжен’ that means Ivan have beaten Fedya and now Fedya had beaten.
Another phrase that we need to understand is ‘дать пизды’, it’s not a process but it’s a plan to beat someone. So we can say if ‘Иван хочет дать пизды’ it’s mean that Ivan going to beat someone.

If we return to our main explanation for the phrase ‘не пиздим будешь’ it can be now understandable like a synonym to ‘не отпизжен будешь’, that generally means avoid of being beaten.
Based on all said above we can conclude, that for not to be ‘пиздимым’ or ‘отпизженным’ you should avoid situations, when somebody wants, to ‘дать пизды’ to you or, if it’s already going, you should defend yourself and ‘пиздить’ the aggressor too.

Thank you for reading! This article was written for learning purposes because I’m attending English lessons.

Summary of Code Sport article from “Open Source for You” magazine

My favorite places in Odessa